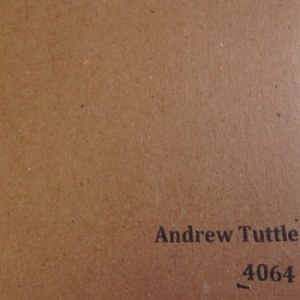 4064 is the debut EP release from Brisbane, Australia based musician Andrew Tuttle. Whilst winding down his previous musical project Anonymeye in late 2012 and early 2013, Tuttle continued to work on new recordings during the Australian summer. A relocation of house and home studio, new creative opportunities, and regular seasonal downpours subconsciously motivated Tuttle to create music reflecting on exciting new beginnings and seasonal and domestic bliss.

4064 (pronounced Four Zero Six Four), named after the suburb of Paddington in which the EP was written, features five new works, ranging from the title track, featuring a contemplative banjo motif that collapses into itself before eventual redemption; to the floating arpeggiated synthesiser workout Fallen Powerlines; to Porch Life, a blissful meeting of Farfisa organ and computer; and other points in between.

The five tracks on 4064 see Tuttle eschew his acoustic guitar, an integral instrument in previous projects; in favour of banjo, synthesiser, and organ. Whilst this isn’t predicting future directions by any means, the instrumentation used reflects Tuttle’s desire to explore differing musical outcomes now and into the future.

Mixed and mastered by Lawrence English at 158, March-April 2013.

Recorded and edited at Wilden St, 2012-2013.
Additional recording on tracks 2, 3 at Wavelength Recording by Joe Panetta.
Mixed and mastered by Lawrence English at 158.

Thanks and love to Frith, the Tuttle family, Lawrence, Joe and 4ZZZ FM for the donated recording time, Gavin Catling, and everyone else who has supported me throughout current and old projects.